To my Father, from Sally. 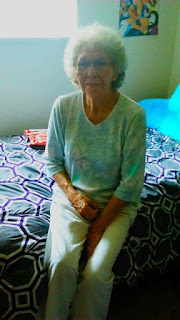 To my Father. From Sally.

To some, our nickname for you doesn't make sense, they'd have to know
us to understand. Which, in a way, was pretty much how we lived. And is
how we still live even though you're not here anymore. I had to leave up
north before you left us, and because of that I couldn't properly say goodbye.
That still eats away at me, a year and a half later. I miss you. I wanted to say
goodbye. Be there in your last moments of clarity. Apologize for how often
we fought. I never meant to. And I never thought it would hurt this much
when you were gone... It just... Feels so wrong without you here... So wrong
to see grandpa without you... It just doesn't make any sense in my head or
in my heart...

There's so much I want to tell you. So much I want to talk to you about.
I'm getting married, probably next year. I proposed to Michael. He said yes.
I'd always imagined you at my wedding, hugging me tight in your bony arms,
and kissing my cheek, and congratulating me. Since, I know you very well
would've been able to figure out, I can't afford a whole lot of things for
the wedding. And I'm making my wedding dress myself. Which, I so wish
you were here to help me with since you were and ARE the best seamstress
I've ever known. I'd have loved to have your touch in that. It would've
made it absolutely perfect.

But you won't be here... Unfortunately... And that puts a major hole in
the wedding. It won't be perfect now with you missing from it. But, it
won't be a "Traditional" wedding anyhow. Since there's another thing
I wanna tell you about.

Michael is what you call "Trans". You know how when people are born you
know what gender they are? Well, Transgender people are different. They're
physically one gender, while in their hearts and in their minds, they're the
other gender. That's what Michael is. He's a transgender female. She he's
going to become a woman. And I'm supporting this because of how much
I love him. I don't think you would have supported this fully when you were alive...
In fact, I don't even know how you would have reacted to this news in general.

I think you would have been against it at the start, or understood it for that
matter since you lived in another time. But I think you would have gone with
it since Michael and I love each other so much. It's because of Michael I've
been able to become more responsible and take care of a lot of things better
than I used to.

I think you might be proud of me for how far I've come in the past two years.
I still cry from how much I miss you. I still wish I could've said goodbye. I still
want to hug you one last time and tell you that I love you. But I guess this'll
just have to do for now.

Know that I love you, Father. And I will know that you're watching over us and
blessing my love and my wedding. I will see you at the end of this life. I hope
you will be the one to guide me through that door of light. Guiding me with
my hand in yours. Your ever so bony, but comforting hand.

- Sally
Posted by Ren Allen at 3:46 PM No comments: Links to this post

Participate in Letters to the Dead

If you have a letter to someone now gone, or some art or photos to share here at Letters to the Dead, please email them to facesbyren@gmail.com. Please include "Letters to the Dead" in your subject line so I won't miss it.
Looking forward to hearing from you! I hope that in the writing, you find a sense of peace and healing as I did. Much love.